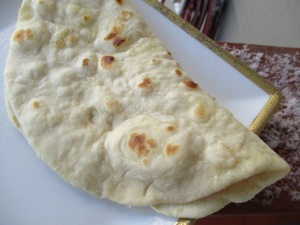 Many years ago when I was newly married and lived in a suburb of Seattle, I met a lovely family. They were Indian but had settled generations before in Guyana. I was a young American girl who knew nothing of the world. They invited me into their home on many occasions to watch them make food, help and learn.  I tried to help them but at the time it seemed very overwhelming. It was Ramadan and they were cooking a dinner for people at the mosque, Yellow Curry and Roti.  They worked in batches mixing chicken, spices and then another large batch was started and finished. I stood watching in amazement, never dreaming I would make a large amount of food like that! I made this Roti many times over the years but in my period of “no home cooking” I never made it. In the past 4 years I rekindled my love for cooking and so this bread was a must.  We don’t usually bag it up as there is nothing left to keep for later. Again, this is my version of an authentic food and might be way different from others.

Enough water to bring dough together which could be a few more spoons.

Mix all ingredients either by hand or in a mixer with a dough hook. Let this knead for several minutes.  Cover dough and let is rest for 30 minutes.

Roll dough into balls, cover and let them rest for around 15 minutes. Place individual ball on work surface and start rolling with a rolling pin. Turn dough over and continue to roll making thin, keeping it even as you do this. Rolling is very important in both Arabic bread and Roti. You can make large pieces of bread or smaller. This amount of dough made approximately 6-8 pieces of bread.

Coat a cooking pan or griddle lightly with olive oil.  Turn it to medium heat and let it get warm.  Place Roti on and let it begin to bubble, when it is brown turn and cook until done.