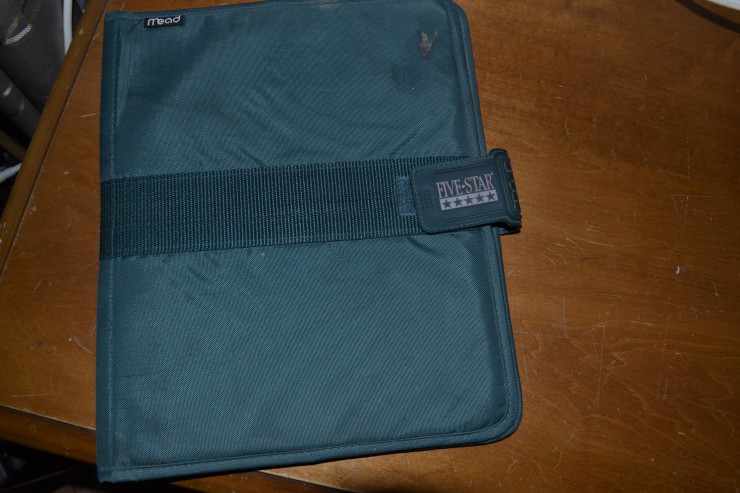 I hope this isn’t confusing but I am just writing randomly and in no particular order. I am finding this therapeutic in some small way and it is helping to relieve some stress. This story is set in 2005, the year before my two sons headed to college in the states. The picture is the actual notebook that Osama purchased for me, it has been with me ever since.

The green velcro notebook was finally secure, tucked under the dark recesses of the queen bed. The usual inspections were made, a quick walk past the bed, back and forth, stooping from each angle to be certain that it was no where in view, that little eyes would not excitedly point it out, that it would be gone and forgotten. After repeating this inspection several times, it seemed that this ordeal had come to a close. The receipt had been soaked in a cup of water until it disintegrated into pulpy white shreds, packed into a an empty can of tomato paste and thrown into the garbage. It was then taken out to the street dumpster and tossed to the back until the weekly garbage truck rattled past to make it’s collection.

I had been ordered to take the notebook back, to produce the receipt and to never again encourage such frivolous and pointless purchases. Why would my son buy such a ridiculous, unnecessary item, it must have been through my guidance and instruction, a plan? I stood before him motionless as hot salty tears forced their way to the surface and down a tired, worn face. His voice boomed loudly until it reached the maximum level, the inevitable outcome, brought about by “rebellion” and “disrespect”. All eyes were fixed on me, or so it seemed in this alternate reality. The window stood before me, and on the outside, a small narrow courtyard where ladies walked and children played. Little Heme fussed and pulled on my leg and the other children stood scattered throughout the house. Somehow I felt that I had made a sound proof barrier, only me standing in isolation, protecting young minds from the course of these odious events. I bit my lip and scratched at my cheek hoping in some way that this would put a stop to the tears that now fell in a steady and bothersome stream. A fist pounded loudly on the table and now pacing ensued around me and then to the stairs and back. I stood at attention as I had been told, no crying, no excuses and a short reply, “I am sorry I won’t do that again”.

I crumpled the receipt behind my back, shoving it into the bag that held the coveted notebook. I shook my head and agreed it would be returned, banished. The tirade lost it’s steam and I ran up the stairs, brushing hair and tears into a rumple. My son followed me and instructed me to never return the notebook, it was filled with personal pages created for me, the optimal list maker’s dream. Pages lovingly crafted around my busy life and need for order, replacing a white pad and pencil where lists were written and crossed off. Daily, weekly, monthly, menus, goals and contacts all neatly placed with colorful tabs. I knelt down and carefully shoved the notebook under the bed and to the darkest corner. I heard my son heading down the stairs and it was too late to intervene. Agitated discourse could be heard which ended in the words that would become a dare for everyone, “Do not ever buy anything for mama, ever”