The apartment brought with it many benefits, large clear windows with a view to the street, the possibility of walking to a nearby grocery store and most importantly a new and better school that shared a wall with the building. I listed these things in my mind each and ever day as night enveloped the darkened hallways and unbearable heat overtook the new apartment. Meals were left on the stove and popsicles melted in the freezer, fans made out of old school duftars (notebook) were whisked back and forth with the intent of cooling. Still his words rang in my ears, a privileged American girl, no worries or cares, an easy life, spoiled.  Not having access to regular electricity was quite a draw back and something I  had never considered until it was gone. I tried to make the best of things and reminded the children as well as myself that others went without a place to lay their head at night,no food to fill their hungry bellies and the constant threat of war. I didn’t have to look far to see reality as I watched workers barely clad in scraggy clothing, hailing speeding cars in hopes of earning a few Riyals for a quick wash. I often wondered where their families were and watched them cross the street to a shanty town, metal pieces and boards made up what had become their home away from home. We made our way to the call cabin once every few weeks where I would wait in line and then speak to my parents, sitting on a tiny stool, behind a raggedy curtain. My mother’s once calm and assured voice, was now shaky and full of a questioning bewilderment given the current living circumstances. Days and nights became interchangeable as we sat in the apartment alone.

The job that had allowed us entry to the Kingdom had ended after 9 short months. It had been incompatible with his level of expertise and education. To enter the kingdom one must have a sponsor, this can be an individual or a company.  He would not be able to transfer his Iquama ( I.D. and paperwork allowing you to be in the kingdom) unless they released him and so he agitated and provoked until they declared they would no longer need his services. He spent the next 12 months at home, making inquires about jobs for expats and visiting the numerous friends he had collected since his arrival in Saudi. Most days meant drinking tea with friends and taking naps interspersed with various leads that never seemed to solidify.  One day, like any other day he went out in hopes of finding his dream job, visited friends for hours and then returned home. He entered holding a large box, packing tape meticulously wrapped around each corner, familiar letters faithfully written across each side. The kids gathered around eagerly as he placed the large cardboard box onto the carpeting that had been salvaged from the villa. It was neatly wrapped up, a brown, ordinary box, taped and sealed with a precision that could only mean one thing, Mom!  Although the girls could not read they loudly and in unison shouted, GRAMA!

We quickly rummaged through the contents before the lights went out. A gift for each child was retrieved and they sat in the mejalis (men’s sitting room) laughing gleefully at their good fortune. I promised we would empty the box as soon as morning light allowed and each child fell asleep with thoughts of the hidden treasures that awaited them the next day.  I gathered up the laundry for the early morning routine and placed it in the kitchen near the washer, I did dishes and anything I could before total darkness set in. I sat on the couch pad and rested in the glimmer of the light from the street lamps, thinking of my mother and father and the box. Memories drifted back to summers I spent walking through our neighborhood to the community pool, riding my bike with friends and rolling down the big green summer hills in the backyard. We camped in our tent and then they bought a trailer, we made campfires, hiked to the swimming area, roasted marshmallows and as teenagers angrily objected to these trips! It was all a blur now and he snapped me back into reality when he entered the dimly lit room. He commented on the box and how nice it was of them to send it, although his pants were too long and his tie too brightly colored, but all the same, a nice thought and well received.  He sat next to me in the dark and asked me what I had received from the box, my heart sank as I knew what was next. He spoke for 10 minutes or more about the lovely gifts of perfumed lotions, soap and candy that he knew I didn’t like and never used, about a journal that was over priced and a waste of time.  In the end the same result was coming, I must give up my treasures, maybe holding on to one small item if I wanted to keep my children’s gifts.  I knew the price that had to be paid and although it was unspoken, as many things, it was well known to us both.  He spoke of the children’s gifts and how impractical and expensive they were. Children in other countries were lucky to go to school, did not have clean drinking water and definitely did not have luxuries. I knew all of these things were very true and they ran through my mind daily!  When we lived in the States he would push and prod until some of these unnecessary items disappeared and were returned for grocery money.  The next day, as he slept, I quickly emptied the box and distributed the gifts, feeling secure that my children had their things and no store to return them to. I held the pink bottle, jasmine, I smelled the lotion and then quickly set it down, it was indeed a luxury, something a plain woman like myself did not need. I picked up my gifts and put them in his room, my offering from the box. 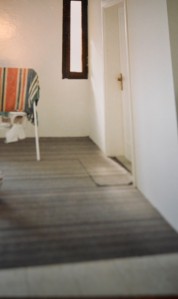 hall way to master bedroom and bathroom in the apartment