After two weeks things had changed somewhat in the villa. We had a stove, a used refrigerator and a few kitchen items. A colander, some utensils and a couple of hand- me-down pans made it easier to cook on the two burner stove. Jet lag had faded and it was a bit cooler in the villa but the same heat remained with no access to a/c.  It was now November and temperatures in Riyadh were still in the mid 80’s, but it was bearable with the window and door ajar. We had settled into a routine of sorts where we slept at a normal hour and woke in the morning when it was light. The days still blurred one into another, no phone, television or contact with the outside world made it easy to forget time.

While living in Seattle I had home schooled the boys. They were at that time almost  6 1/2 and 5 1/2 years old. Our life was very homey, we spent most days doing little school art projects and playing outside. We had many dinner parties where elaborate Arabic foods were prepared. I spent my days cooking, baking, cleaning and doing what I loved best, being a mom. I had several female friends (Hala-aunt) and they might come over during the day or with their husbands at night.  The children laughed and played while we chatted and exchanged recipes and stories of our daily routines. Amu (endearing term for father’s male friends) would visit and sit in a room designated for “men”. When any amu came for dinner he was sure to bring candy, gifts or just a glimpse of the outside world.  In Arab society visiting is just a way of life and your door must always be open to visitors.

As we sat in Saudi the idea of school hung heavy over our heads, we knew it was inevitable and approaching soon. I had full confidence that this would be the most amazing experience for my children. They were nervous to leave me and head off on their own but also filled with anticipation. I was also very nervous but felt this was for the best. They would learn a new language and culture and also meet friends. They would, of course be treated very well, a kindly Amu would explain the rules and understand that the boys didn’t know any Arabic. I am a worrier but felt very confident that this would be a brilliant new chapter in life.

Evidently this villa was chosen because it was 2 blocks away from a boys school. The first day of school came, the boys had their best clothes on, and new shoes I had purchased and packed in our boxes.  My oldest was not happy to be living in Saudi and did not want to make this move. He did not want to go to school or to live in this villa or be away from his home. His younger brother agreed to go to school and try it out and report to him afterwards.  His father took him and dropped him off. I was to walk the two blocks to the school to pick him up at the end of the school day. When the school day ended, I put on my black abaya (floor length, silky coat worn by women) and my scarf and pushed my double stroller down the street.

I made my way towards the school, a very pregnant lady in a long black abaya pushing a brightly colored side by side double stroller with two fair haired toddlers. This is not something that you see in Riyadh! Women have drivers who take them to and from places as well as carrying their bags and helping with the children. Western women take a driver or bus from their compound. So, as I walked confidently down the street, heads turned,  I became an anomaly in this tiny traditional Saudi neighborhood.

I arrived at the street across from the school, it didn’t seem like a busy street but I found it might have been easier trying to cross the Red Sea. I saw no cars coming and carefully started out into the street. I quickly jumped back and stood in amazement and fear as I watched cars, trucks and even bikes honk and show no sign of stopping, instead they sped up and whizzed past. I made several failed attempts at crossing, first walking to different areas of the street, then waving my hand a little as if to say, Please stop! I had to cross in order to get my son and I could feel the panic rise inside of me.  I saw a break in the cars and ran, looking side to side during my sprint across the street. I felt as if we were invisible to these oncoming vehicles.

A wave of boys flooded out of the gates and it looked like an impending stampede. I stood looking for my son in the crowd of boys all wearing white thobes (long white garment worn by men and boys). Finally I saw my little baby, he looked tired and a serious grimace now spread across his face. I approached him and grabbed his hand pressing it into mine. I playfully squeezed, but his hand seemed tired, clammy and flat. His large brown eyes turned up on the ends when he laughed and inquired about a million things that only a mother can answer. Now he stood before me in silence, leaving me to wonder what kind of day would produce this outcome. His eyes drooped and were tired, he walked next to me dragging his feet. I bent down to hug him and touch his face and asked him how the first day had gone. He looked at me and spoke words that left me in total confusion. Mom, Amu hit me on the head with a stick! 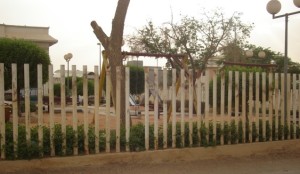 145 thoughts on “The beginning 4-A Crosswalk is a beautiful thing!”