We entered the Riyadh airport and back to the life that had been paused for a trip to Damascus. Goodbye tears and hugs were left behind in Syria along with promises made to return one day.  As the door opened to the new compound home, a warmth and comfort surrounded me. I felt as if I had walked into Grama Elva’s kitchen, sleeping in the sheets that smelled of the blue, endless sky where they hung to dry, waking up to bread toasted “light as the butter”, and hearing her voice once again. Here as I walked through this door I finally felt at home, something that had been lacking as we moved from the unfurnished villa to the apartment downtown, no lights, no furniture, no amenities.  I knew this time things would be different, although I had no idea at the time that anything was truly wrong.

We spent the first days unpacking boxes of clothing and the few possessions that we had. Another “soft package” was provided for residents which included all housewares. The first neighbors that we met were from the UK, Australia, India, and Egypt.  Some residents stayed for years and became good friends while the majority  were only temporary, leaving for other compounds or exiting the kingdom for good. A lovely British lady, Susan, lived next door with her husband Tim and their three sweet daughters. Play dates were set and the girls sat on the porch for hours giggling and having fun.

The summer days in the new home came together as the children picked their rooms and explored the park across the street. The boys made their way to the mini market and recreation center. He had an automatic group of friends and they all gathered together at the pool to have tea, chat and watch the children swim. It seemed like a dream to be living in this beautiful and safe home, surrounded by lovely neighbors and potential friends. In the front of our villa there was a marble porch where the little kids sat for hours playing with new friends under my watchful eye. The porch was to be cleaned each and every day with a bucket of warm, soapy water and then dried with the large squeegee.  Nothing should be on the porch, no toys, no bikes, no sign of the beautiful chaos found in a large family.  It was the first thing people would see of our family and must be clean at all times. The rules were always changing but somehow things seemed stable for now and I managed to successfully keep a peace and calm. He was happy with his position, the boys would attend a new school and I was doing my best to be a good mother and wife.

The summer months were magical and full of carefree days that involved the same routine as in Al-Khobar,  riding the shopping bus, going to the pool and park and the busy daily routine of a mom. The new school year loomed over head and was always in my mind but the lovely summer days and this new life provided a distraction that was needed. The boys would attend a well known, large and modern school. See See and Foof now 6 and 4 needed to attend school which was a terrifying thought. Ideas of where they should go to school whirled around and pressure mounted as this was a must. I took my job seriously and savored each moment of being a stay at home mom always trying to put my beloved children above all else.

His friendship with the “Skeik” grew and he spent 3-4 evenings a week dining with the rich and influential in the elaborate mejalis (sitting room). The “Sheik” lived in Riyadh all week and then returned to his family in Jeddah on weekends. He stayed in Riyadh to tend to his many companies and businesses and this meant an open invitation most nights to those both rich and poor. He (husband) requested desserts for these nights with no excuses of sick children or busy days accepted.  Each tray must have a minimum of 6 dozen, varied pastries, easy to handle, never duplicated, no first time recipes, all of a uniform size and shape. This training would come in handy when after a few months I would be asked to open a small at home bakery for compound residents. I happily complied with his numerous requests as I had been told this was my job and privilege to serve my husband and family. The words he frequently spoke to me soon after accepting a new religion and having two small children still cut into my soul and were a constant reminder of my temporary place in his world. This lead to my constant struggle to secure his love and happiness, “If my mother does not like you or accept you at any time, I will divorce you at a moments notice.” 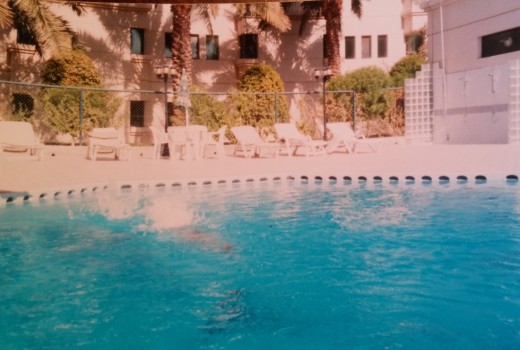 One of the two pools

View from the master bedroom 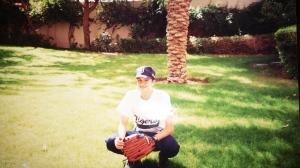 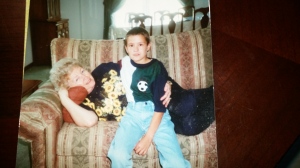 181 thoughts on “A temporary position”